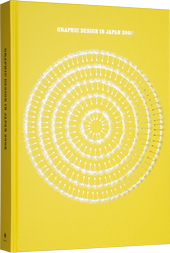 The 10th Yusaku Kamekura Design Award
The Yusaku Kamekura Design Award was established in 1999 in commemoration of the achievements of Yusaku Kamekura, JAGDA’s first president, as a way of contributing to the development of graphic design. The award is presented each year to the work judged to be most outstanding among all entries.
This year, the Award was given to Mr. Taku Satoh for VI, posters and venue design for 21_21 DESIGN SIGHT Exhibition 2: “water”. For the exhibition he won for, Satoh had taken up the theme of “water,” a crucial issue shared by all mankind. Through the power of graphic design, he imparted an image to water – something which is inherently without shape or color – and dealt with this difficult topic in an amusing way not possible by most people. Satoh’s work was acclaimed as a brilliant example making an appeal to society from the perspective of design.

JAGDA New Designer Awards 2008
The JAGDA New Designer Awards were established in 1983 with the goals of calling attention to outstanding young designers and vitalizing the realm of graphic design. Winners are selected each year from among all entrants who have not reached their 40th birthday as of the end of October of the judging year. The 2008 awards represent the 26th to date. As a result of the strict selection process, Mr. Ken Okamuro, Mr. Koichi Kosugi, Ms. Naoko Fukuoka and Mr. Katsura Marubashi were selected as the award-winning designers.

JAGDA Category Awards
Starting this year, new awards were established for each entry category, with the award bestowed on the entry judged to be the best of its category.

Roundtable Discussions
The judging panel held the 10 category-based discussions on the trends of designs created during the year, works which attracted particular attention, and future possibilities.