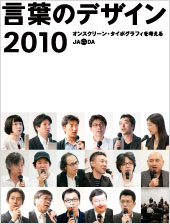 Yasuhito Nagahara reacted to tweets by Kenya Hara “Why is quality of the Japanese typography not good in web environments”. Starting from interest surrounding onscreen typography, they developed discussions into seminar programs and launched “Kotoba–no–Design (design of words) 2010–Issues on onscreen typography” as a JAGDA project. This digital book is a record of eight seminars held from May 2010 through June 2011. Actual images and movies used in each sessions are fully covered.