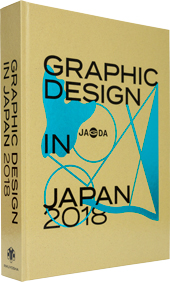 The Yusaku Kamekura Design Award was established in 1999 in commemoration of the achievements of the late Yusaku Kamekura, JAGDA’s first president to contribute to the development of graphic design. The award is presented each year to the work judged to be most outstanding among all entries. This year, the Award was given to Mr. Norio Nakamura for a publicity poster and a series of posters specially created for his solo show. At the judging sessions, Mr. Nakamura received high acclaim for his posters’ “extremely human, naïve freshness without resorting to heavy reliance on technology,” with such comments as “His attractive worldview that lies at the heart of his works arouses good feelings in the viewer,” and “With Norio Nakamura we have hit a new vein of precious ore in graphic design.”

The JAGDA Award was launched in 2008 in reflection of JAGDA’s commitment to commend and record each year’s outstanding works of graphic design – an undertaking JAGDA considers to be among its important activities. The JAGDA Awards are presented to several particularly significant works among those submitted in the Annual that garnered the most number of votes in their specific category. This year, the award was given to the following ten works: posters “Life”, general graphics “Perspective Desk Note”, VI “Takamatsu Art Museum”, book design “Wanobi”, package design “On the Road / She Came to Stay”, magazine advertising “dansko”, ambient design & spatial graphics “mt ex”, interactive design “Boxx”, video “Anioma of Onomatopoeia”, and integrated design “the exhibition ‘Design Anatomy’”.

The JAGDA New Designer Award was established in 1983 with the goals of calling attention to outstanding young designers. The past winners have grown to be the most active creators in the industry. As a result of the strict selection with 152 nominees, 2018 awards, the 36th to date, were presented to Masaki Hanahara, Aki Kanai, and Takuma Fukuzawa.

Prefatory Note: “The Overwhelming Efficiency of a Modern-Day ‘Magic Wand’ and the Era of Designers with a Multitude of Creative Faces” by Shoji Usuda (design journalist)
Special Feature: “One Work from 2018: self-selected by 726 JAGDA Members”
JAGDA Student Grand Prix 2017 Winning Works
Appendix: JAGDA Activities in Fiscal 2017