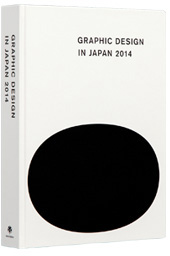 JAGDA, one of the largest design organizations in Asia, has been introducing outstanding designs in its annual Graphic Design in Japan since 1981. Every year more than 1,000 designs selected through strict selection process are introduced with a members directory by prefecture and staff credit such as copywriters and photographers. This is an unprecedented design almanac presenting the latest world-class graphic designs created by Japanese designers, which also serves as a database.

The 16th Yusaku Kamekura Design Award
The Yusaku Kamekura Design Award was established in 1999 in commemoration of the achievements of the late Yusaku Kamekura, JAGDA’s first president to contribute to the development of graphic design. The award is presented each year to the work judged to be most outstanding among all entries. This year, the Award was given to Mr. Kaoru Kasai for “Hiroshima Appeals” peace campaign poster. Mr. Kasai’s winning work was cited by the selection committee as a “dignified and sincere piece of work that makes as aware once more of the inherent social aspect of graphic design.”

JAGDA Awards 2014
The JAGDA Award was launched in 2008 in reflection of JAGDA’s commitment to commend and record each year’s outstanding works of graphic design – an undertaking JAGDA considers to be among its important activities. The JAGDA Awards are presented to several particularly significant works among those submitted in the Annual that garnered the most number of votes in their specific category. This year, the award was given to the following ten works: posters “HIROSHIMA APPEALS”, general graphics “Every Little Thing ON‘N’ON”, VI “Maidoya”, book design “PETER ZUMTHOR; ARCHITEKTUR DENKEN”, package “Echigo Kamegonya”, newspaper advertising “Carving of the Forest”, ambient design & spatial graphics “HOUSE VISION 2013 TOKYO EXHIBITION”, interactive design “Creation Is Free. Production Needs Fee.”, videos “ake-vono”, and integrated design “21_21 DESIGN SIGHT Exhibition; Design Ah!”.

JAGDA New Designer Awards 2014
The JAGDA New Designer Award was established in 1983 with the goals of calling attention to outstanding young designers. The past winners have grown to be the most active creators in the industry. As a result of the strict selection with 33 nominees, 2014 awards, the 32nd to date, were presented to Daijiro Ohara, Junya Kamada, and Kentaro Harano.