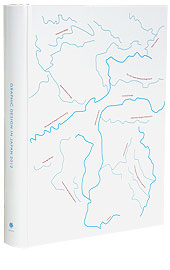 JAGDA, one of the largest design organizations in Asia, has introduced outstanding designs in the Graphic Design in Japan annual every year since 1981. These designs, selected through a strict selection process, are introduced with a large number of pictures and are recommended with confidence. Some 600 designs are categorized and presented with the purpose of production for each work. “Combined Design” category is newly introduced this yearto enable designers to submmit works covering different design genres as one project. In addition, a list of JAGDA members by prefecture and indexes of copywriters and photographers are included. This is an unprecedented design almanac, a collection of world-class graphic designs created by Japanese designers, which also serves as a database.

The 14th Yusaku Kamekura Design Award
The Yusaku Kamekura Design Award was established in 1999 in commemoration of the achievements of Yusaku Kamekura, JAGDA’s first president, as a way of contributing to the development of graphic design. The award is presented each year to the work judged to be most outstanding among all entries. This year, the Award was given to Mr. Katsuhiko Shibuya for poster “SHISEIDO”. Shibuya had been dealing with the arabesque pattern which could be considered as the corporate identity of Shiseido, and finally he came to be reputed as “having given a new life to the pattern to suit a new age.”

JAGDA Awards 2012
Starting in 2008, the JAGDA Awards were launched in reflection of JAGDA’s commitment to commend and record each year’s outstanding works of graphic design – an undertaking JAGDA considers to be among its important activities. The JAGDA Awards are presented to several particularly significant works among those submitted for entry in the Annual that garnered the most number of votes in their specific category. This year, the Award was given to the following seven works:“Kazunari Hattori:November 2010”, “Air Bonsai”, “Book Express”, “Phillippe Weisbecker Drawings”, “Special Package for Shiseido Parlour Ginza Flagship Store”, “Form, Color and Structure: The Sensual World of Aoshi Kudo” and “Louis Vuitton Forest Photo Exhibition by Mikiya Takimoto”.

JAGDA New Designer Awards 2012
The JAGDA New Designer Awards were established in 1983 with the goals of calling attention to outstanding young designers and vitalizing the realm of graphic design. Winners are selected each year from among all entrants who have not reached their 40th birthday as of the end of October of the judging year. The 2011 awards represent the 29th to date. As a result of the strict selection process with 29 nominees, Daigo Daikoku, Yui Takada and Tentaku Masashi were selected as the award-winning designers.